Bayfield County’s newest recreation area could have turned into something very different.

When developer Bob Davidson approached the Town of Bayfield planning commission in spring of 2017 he laid out his vision for the 104-acre property he owned high atop Fire Tower Road in Bayfield’s orchard district. He was attracted to the property for its steep topography, stunning views, and beautiful forests especially in the fall. Davidson, who had previously developed the low-density, low-impact Brickyard Creek community, proposed a similar conservation sub-division for the property, one of the highest points in the county.

But the plan commission, along with some neighboring property owners, didn’t support a development on the site, desiring instead to keep the property in its natural wooded state. Davidson wasn’t pleased by the rejection, but as the meeting ended he was approached by plan commission member Demaris Brinton with a question. Would he consider working with Landmark Conservancy to instead find a way to convert the property to a place for public recreation?

As it turned out, he would. It took more than two years working with Landmark’s staff to iron out the details, obtain funding and complete the paperwork but in December the property was acquired by Bayfield County for use by hikers, skiers, birders and other outdoor enthusiasts. Funding for the $171,840 purchase came from the Wisconsin Knowles-Nelson Stewardship Program and Wisconsin Coastal Management Program. 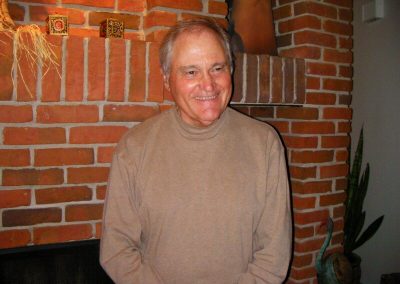 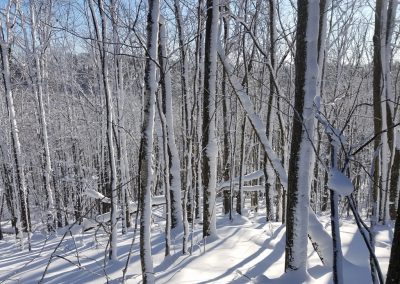 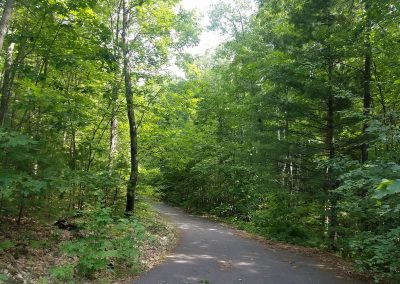 Davidson, credits “a group affair” for turning his original vision into something that will benefit both the Bayfield community and visitors to the region.

“There are a lot of components, a lot of parts that went into it,” he said. “It wasn’t just me, but I did own the land.”

Brinton praised Davidson for being open to considering a public recreation area over a conservation sub-division.

“At the end of the meeting it was just sad. Bob was so disappointed; he was so sad because he wanted to do something meaningful with the land. (A sub-division) just wasn’t a good idea for that land. I just said to him, why don’t you talk to Landmark Conservancy. It’s a beautiful property and I know you want to do something good. This could both meet your goal of doing something meaningful and getting some return on your investment.”

Tom Gordon, chairman of the Town of Bayfield, and other Town Board members were supportive of the project as the region has been emphasizing outdoor recreation in its tourism efforts for some time and needs to make sure there are ample opportunities for it. “The Board does not oppose all development but just felt the property was better suited for public use, especially in the middle of apple country,” he said.

As he thought more about it, Davidson agreed.

“Kind of in the twilight of my life I thought it would be the right thing,” said Davidson, who is 86. “It’s such a beautiful piece of land. In the end, I’m really pleased with the whole thing.”

Erika Lang, Landmark Conservancy’s Conservation Manager in its Bayfield office, was encouraged by Bob’s actions. “Land protection is only achieved by working together as a community. Conservation of this land provides important protection for wildlife as well as the water quality of the Pikes Creek watershed and downstream Lake Superior. Keeping the property in its forested condition will provide multiple benefits including flood mitigation and increased resiliency of the landscape to changes in climate. Recreation is an important driver for this region, and Landmark is also excited about helping to improve visitors’ recreational experiences on the Bayfield Peninsula.”

Jason Bodine, Administrator of Bayfield County’s Forestry and Parks Department, said no firm plans have been made for the site but it is likely that trails for hiking, skiing and other non-motorized uses will be developed, along with a small parking area. The name of the site is yet to be determined, he said, though it may be along the lines of Fire Hill Forest Preserve. Yurts available for rent by campers have proven popular in other county parks and might be added at the Fire Tower property as well.

“There’s a lot of recreational potential,” he said. “The potential is almost endless. With that terrain and that contiguous block of forest…it’s a beautiful property. It’s really rugged, there’s not a whole lot of flat areas on that property.”

Bodine credited the collaborative efforts of the Town of Bayfield, Landmark Conservancy and others for helping advance the project but especially singled out Davidson for embracing the idea when his own initial plan was rejected.

“It takes people like Bob to have the vision and willingness to see this through, and the persistence of Landmark Conservancy,” he said.

Does Davidson think the final product is something of a legacy?

​“Yes, I do,” he said. “I do. It just makes me feel very good that I was at this age financially able to pull this off. But that’s not the important thing. The important thing is that it’s preserved.”