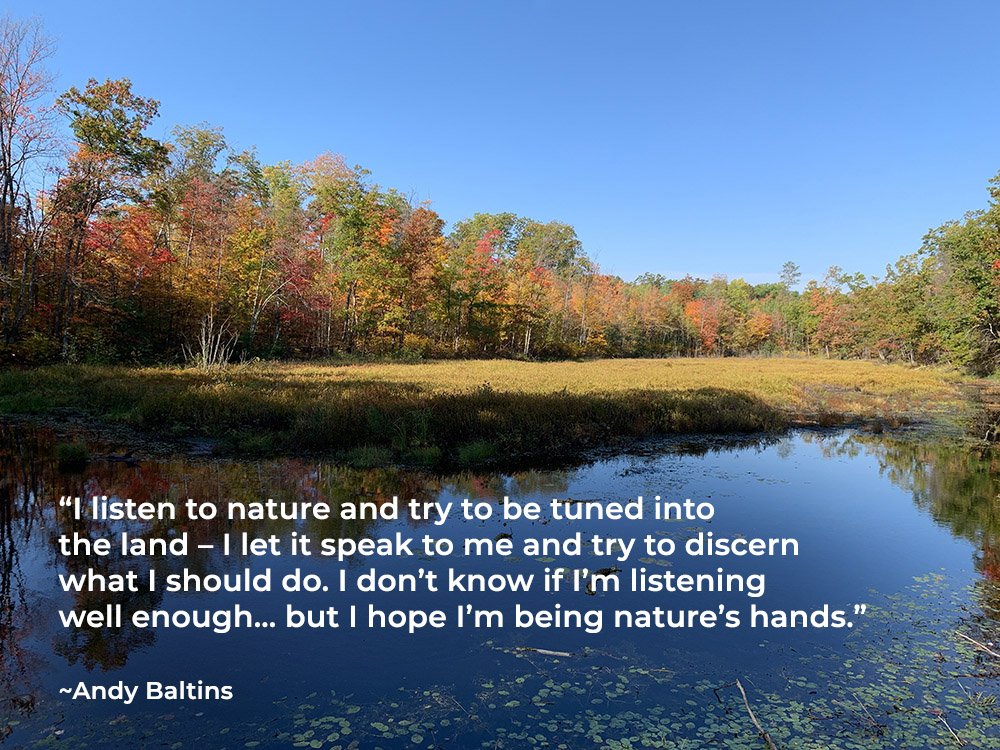 Open bog at the south end of Petty Lake, a 15-acre seepage lake.

In the 1980s, Andy Baltins and his late wife Nancy set out on a quest to find a property that would serve as a retreat from their daily life in Minneapolis. They were seeking solitude and hoped for some water access, but most of the cabins their realtor showed them did not offer the privacy and serenity they sought.
After 4-5 years of looking for the perfect place, they abandoned their dream – only to, in Andy’s words, be “rewarded by the universe” for letting go. 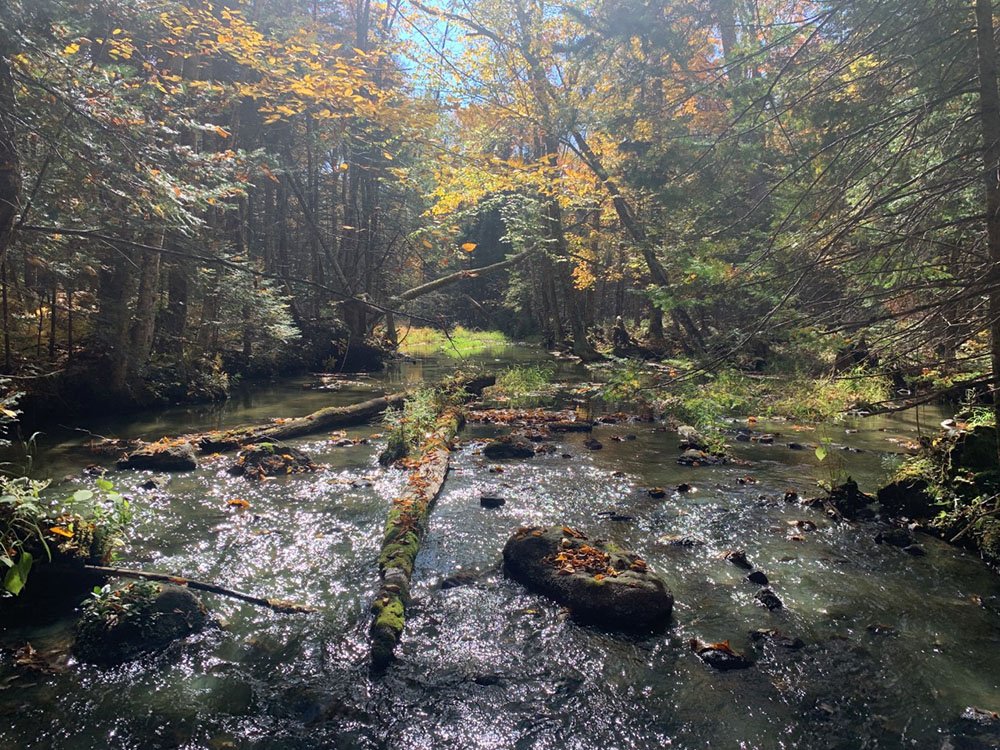 Spring Lake Creek – A tributary of the Namekagon River.

A broker from Spooner called up to tell them about the sale of a 240-acre paradise in Sawyer County that had been previously owned by Chicago artist George Petty. When they set foot on the land, they felt the presence of a Higher Power; there was not a soul in sight, and only the soothing sounds of nature.

Baltins, who was a founding member of Couderay Waters Regional Land Trust (CWRLT), shared that he feels a strong connection to the earth when he spends time on the property. They were able to subsequently purchase adjacent land, bringing the total acreage to 547. He noted that the lake is in the form of an arrow, and they had a sculpture created and installed by a Navajo artist on what they perceived may have been a sacred site. Baltins often spends time alone on the property or joined by his current wife. 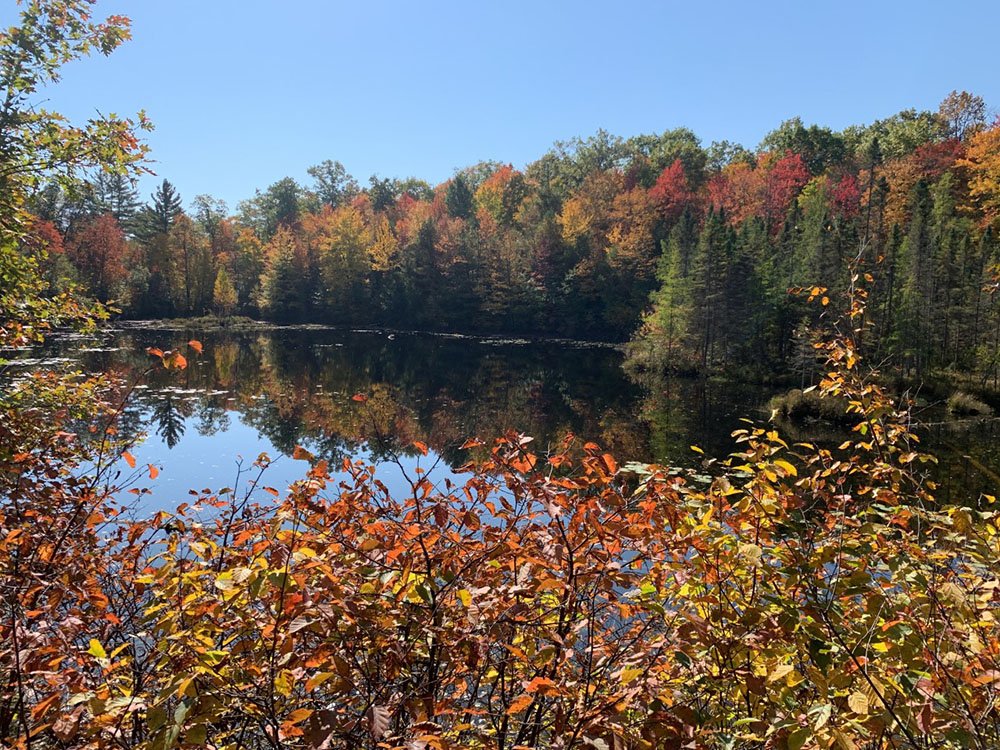 Not a naturalist by vocation, Baltins has enjoyed learning about the land’s unique features. He was fascinated to learn that the property is in the epicenter of a kettle moraine, formed thousands of years ago at the margin of two colliding ice sheets. This glacial activity resulted in varied topography and soils, including several glacial features.
He loves going into the woods and over time has hand-built 10-12 miles of trail, some of which intersect with old logging roads and paths traversed by wildlife. Between 30-40 acres of the forest includes 300-year-old majestic white pines that escaped northern Wisconsin’s historic cutover. His neighbor to the north is a biologist and has taken him out to the acid bog where they have observed three species of carnivorous plants.

Baltins considers himself a steward of the land rather than owner, and always knew he wanted to protect this “magical” place. Mostly, he prefers to leave the landscape as-is, noting “nature has a way of repairing things.” However, six or seven years ago there was a significant blow-down close to the home, and nearly 150 trees had to be removed. 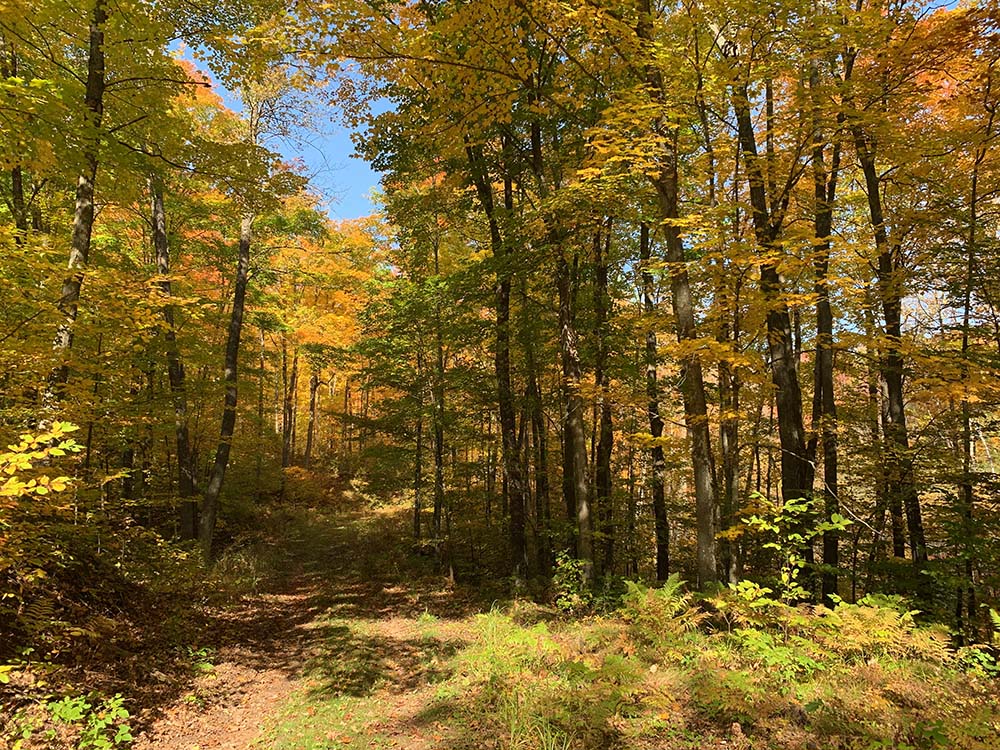 Baltins had always wanted to build a labyrinth but had not found the right location. This natural event turned into that opportunity, and depending on his frame of mind, he enjoys walking in the woods, along the lakeshore, or through the labyrinth created on the site of the blow-down. 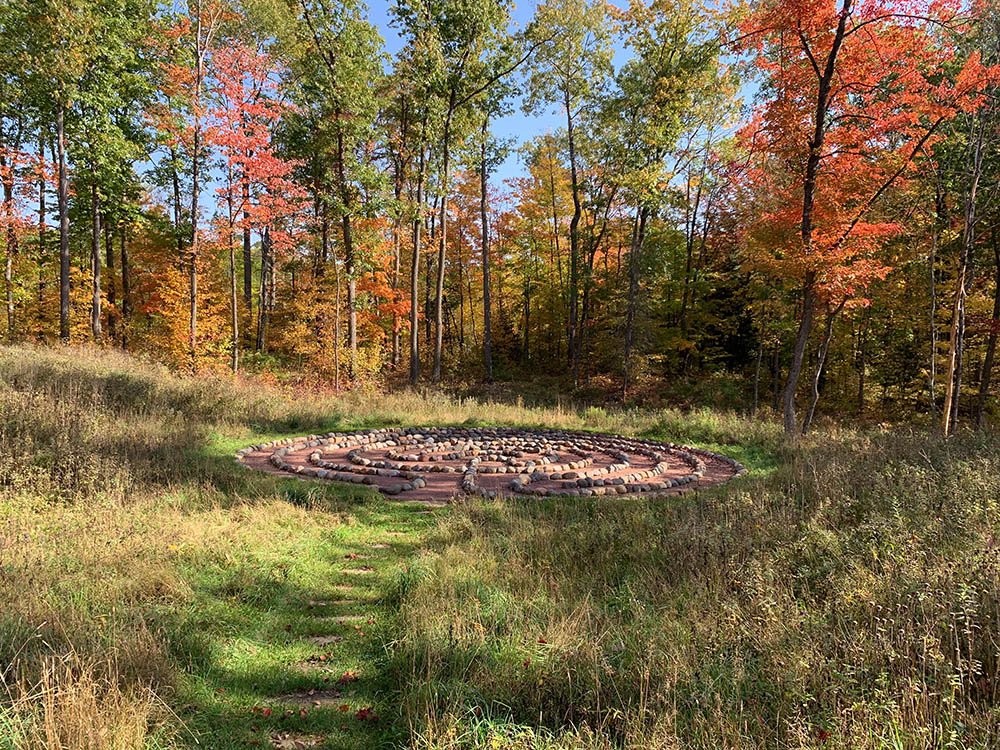 Baltins’ neighbor to the south had approached him, wanting assurance that he wouldn’t sell to a developer. Ironically, she passed a short time later, and her property was sold and divided, despite his efforts to intervene. He said he regrets not striking an agreement with her that could have protected the property.

Given the pandemic, the fact that he has lost people in recent years, and that he is aging, he felt like now was the right time to protect his land permanently via conservation easement. “I didn’t want to miss the opportunity,” he said. Last year, Landmark Conservancy merged with CWRLT and has taken on an active role in protecting land in the greater Hayward area. Landmark is thrilled to instill protection on large tracts of diverse forested land in the area that will make a meaningful difference in sustaining biodiversity as our climate changes.

Donate to Landmark Conservancy today to help protect special places like this. Your gift is welcome and appreciated!